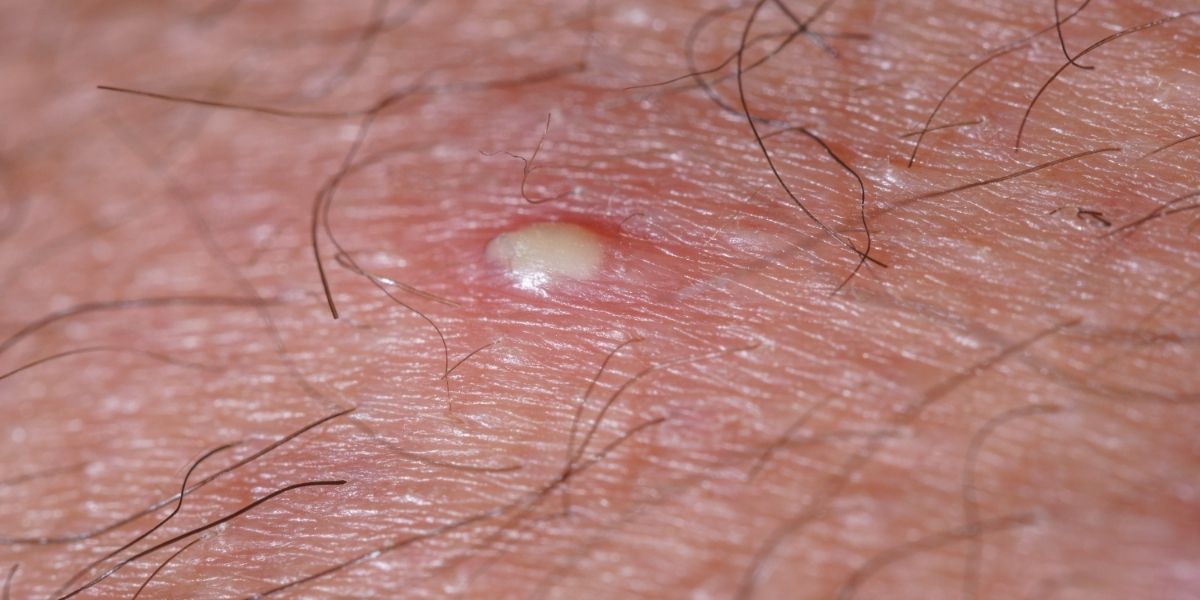 The onset of bumps on your body, especially in the genital area, can be quite off-putting. It can be even more alarming if you’re sexually active. This leads many people to wonder whether these bumps are symptoms of a herpes outbreak or just ingrown hair. This article will tackle the fundamental differences, including symptoms, diagnoses, and treatment of ingrown hair vs. herpes.

Ingrown Hair vs. Herpes: The facts

Herpes is known to manifest in two general forms: oral herpes and genital herpes. Either of which can be caused by herpes simplex virus types 1 and 2 (HSV-1 and HSV-2). Herpes is one of the most widespread sexually transmitted infections out there, affecting two in every three people under 50 globally. With that being said, it wouldn’t be much of a surprise if you contract it if you’re sexually active.

Ingrown hairs are bumps on your skin that form mainly after shaving or waxing hair. Hair will normally grow up and out of the hair follicle, but sometimes, it can curl into it, causing it to grow under the skin. When hair grows into the follicle, it can cause irritation and inflammation, causing the skin above it to become red and bumpy. Unlike herpes, anyone can get ingrown hairs, although it affects those who regularly remove their hair more than those who don’t.

While they can appear somewhat similar, here are some of the telltale differences when it comes to ingrown hairs and herpes.

The first of the telltale signs is the location. Herpes mainly occurs in the genital and lip area (genital and oral herpes). It rarely spreads to the rest of the body, except for shingles. Disseminated herpes can be extremely dangerous and should be taken seriously, but it mainly affects those who are immunocompromised.

Ingrown hairs can form all over the body, especially if you’ve shaved recently. Instances of ingrown hairs can grow on the same areas as herpes, but if you notice some of them on your chest, back, or legs, you could merely be susceptible to inflamed ingrown hairs.

Ingrown hairs look more like pimples than anything. They’re these red, shallow bumps that form virtually anywhere. Ingrown hairs can become infected and pus-filled, giving them the yellowish-green appearance, but this isn’t always the case.

Herpes cold sores, on the other hand, will almost always be pus-filled. If these sores burst, they leave an ulcer-like sore on the skin. After they burst, the sores will become hard and scab.

Pain and other symptoms

Pain, coupled with other symptoms, is also a telling indicator between ingrown hairs and herpes. To the touch, ingrown hairs can be a bit tender and painful, much like a pimple would be. If you try to press or squeeze it, you will feel sensations similar to what would happen if you pressed or squeeze a pimple.

Cold sores are quite different. The pain you get from cold sores is quite sharp and lingering. They give off an itching or burning sensation and are typically very tender. During an initial herpes outbreak, cold sores will also be accompanied by a flurry of other symptoms, including a fever, muscular pain, and headaches. Another telltale sign for genital herpes is a pain when you urinate, which inflamed ingrown hairs don’t cause.

If you want to be totally sure of what you have, you can always get an expert’s opinion.

Since you have two different diagnoses, treatment for each will also be different.

When you see an ingrown hair form, it’s best to leave it alone. Without any special treatments, they will typically get better on their own. Ingrown hairs will generally subside within a few days, with more severe cases lasting a few weeks. But you shouldn’t expect anything more than a little pain and discomfort.

You shouldn’t aggravate the ingrown hair by picking and scratch it. Doing this is actually counterproductive, as it could cause the ingrown hairs to get infected, causing them to last longer and hurt more.

If the ingrown hair is visible and close to the surface, you may use a sterilized needle or tweezers to tease the hair into coming out gently. Don’t try to do it if the hair lies deep in the skin. If infection occurs, you will need to apply a topical antiseptic, antibacterial, or antiviral medication to treat it, depending on the type of infection.

Herpes is lifelong, which means there is no treating the virus itself. You can treat the accompanying symptoms, including cold sores. We have an article discussing what you can do to fix it short-term and long-term. You can read that here.

Condoms: How Effective Are They And Why You Should Be Using Them How Long Does It Take To Get STD Results?